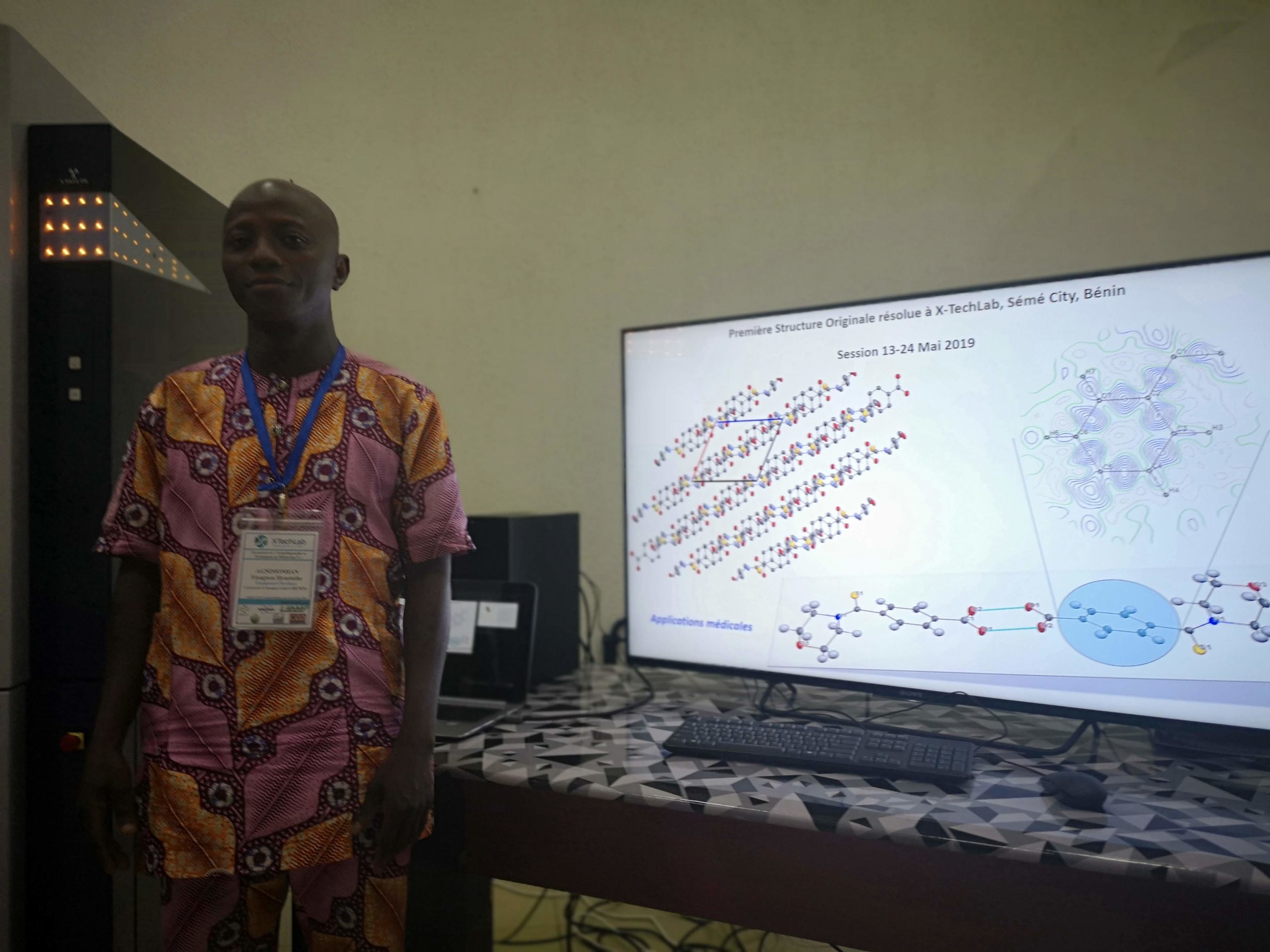 X-TechLab: Dr. AGNIMONHAN you are a chemistry PhD and participated last May in the first training session in X-ray techniques organized by X-TechLab in partnership with Sèmè City and since then we only talk about you in the laboratory; Why did you become a star?

Dr. AGNIMONHAN A star because we were the first beninese to make his resolution of a molecule in Benin! By the way, during the May training organised by X-TechLab in partnership with Sèmè Citywe have solved the structure of one of our molecules; something that wasn’t ganged up in advance. For this resolution, it was necessary to have made a good recrystallization of the molecule and also a good choice of crystal.

X-TechLab: What makes your results so exceptional?

Dr. AGNIMONHANthe results are exceptional insofar as the resolved molecule is a new one that has never been synthesized to our knowledge. It has been synthesized in Benin in the Laboratory of Physical and Synthetic Organic Chemistry of the Department of Chemistry / Fast / UAC. Admittedly, it has been characterized by spectrometric analyzes; but we needed a resolution of its crystalline structure in order to have fundamental information for an exploration of its pharmaceutical activities.

Dr. AGNIMONHANThe resolution of a molecule consists in determining its crystalstructure, i.e. knowing the parameters of its mesh, its group of space, the position of the atoms in the mesh, in other words its three-dimensional structure.

Dr. AGNIMONHANX-ray technology is one of the most widely used methods of obtaining crystallographic information from a molecule.

The principle is to use an X-ray beam that meets a crystal, is returned in specific directions determined by the wavelength of X-rays, the dimensions and orientation of the crystalline network. By measuring the angles and intensity of the diffracted rays, it is possible to obtain the dimensions of the crystalline mesh, its group of space, its three-dimensional image of electronic density thus allowing to form the crystalline pattern of the Molecule.

Dr. AGNIMONHANDid you know that aspirin can, for example, crystallize in at least three (03) polymorphic forms with different properties such as the rate of dissolution and biological activity of the drug. As a result, aspirin can be synthesized, which may not have the desired analgesic and anti-inflammatory properties if it does not crystallize in the space group that confers these properties.

The resolution of our molecule has made available to the scientific world all the information necessary for an exploration of its biological activities.

Dr. AGNIMONHANI’m enjoyed to have the grace to be the one solving the molecule thus revealing to the general public that young Benin researchers are capable if the least and the equipment existed.

The partnership between Sèmè City and X-TechLab must be part of a forced marriage to maintain. Because this has not only allowed us to have a training in crystallography and X-ray diffraction technique (in a practical way), but also will help to stimulate the development of scientific research through its African cyclotron project.

Dr. AGNIMONHANThe next step is on the one hand to dock this molecule, i.e. molecular modeling that will predict the structure or structures of the complexes formed between the (active) molecule and a protein, especially on the MGL enzyme ( Monoacylglycerol Lipase) and FAAH (Fatty Acid Amide Hydrolase), on the one hand and on the other hand on other cancer cells.

The inhibition of MGL and FAAH has a beneficial effect in pathophysiological phenomena such as pain, neurodegenerative diseases such as Alzheimer’s disease whose previous studies have shown the interesting activity of this family of compounds on these enzymes.

In addition, explore new approaches to synthesis that can influence the crystal structure and which can obtain if possible other polymorphic forms of this molecule for exploration of biological activity.

Dr. AGNIMONHAN: Before I urge the authorities, let me thank them for their initiatives to drive the development of scientific research. We urge them to continue on this path and above all not to harm the means and equipment that allow researchers to impact the development of the country through their scientific work.

Dr. AGNIMONHAN: My thanks go first to Benin President for his vision of seeing the Benin High in terms of scientific research.

We would like to personally thank the coordinators of the Platform X-TechLab Sèmè City, X-TechLab, let us quote in particular Prof Thierry d'ALMEIDA and Dr. Marielle AGBAHOUGBATA.

Thanks also to the team of trainers of Prof. Claude LECOMTE and my colleagues from this first session,

X-TechLab: Thank you so much Dr. AGNIMONHAN for the availability!